Richard Teleky is a critically acclaimed fiction writer, critic and poet, and also a Professor in the Humanities Department of York University, in Toronto, Ontario.

Born in Cleveland, Ohio, he received his B.A. from Case-Western Reserve University in 1968. That year he moved to Canada, with a Woodrow Wilson Fellowship, to study at the University of Toronto and work with Northrop Frye; he received an M.A. in English in 1969 and his Ph.D. in English in 1973. His doctoral thesis, “The Literary Significance of The Golden Bough”, focused on the impact of Victorian anthropology, myth studies, and the work of Sir James Frazer on modernist literature. He taught at York University from 1972-75, served as a Research Consultant for the Department of Education of the Art Gallery of Ontario, and next made a career in publishing at Oxford University Press Canada, from 1976-1991, where he was Senior Editor and then Managing Editor. He had his own series, “Studies in Canadian Literature”, worked with many of Canada’s leading literary and academic writers, and commissioned and edited books on a wide range of subjects. During those years he often taught part-time for the English Department of the University of Toronto at Erindale and Woodsworth Colleges.

With the desire to concentrate on his own writing and teaching, in 1991 he returned to academic life in the Humanities Department of Toronto’s York University, where he became Administrator of the undergraduate Creative Writing Program for a decade. He now focuses on interdisciplinary courses, and has taught in several graduate programs at York, and as Adjunct Faculty at the McGregor School/Graduate Studies of Antioch University in Yellow Springs, Ohio; for nearly twenty years he was also an Adjudicator for the Banff Centre Writing Program in Banff, Alberta.

His books include the novels The Blue Hour (2017), Winter in Hollywood (2006), Pack Up the Moon (2001), which was short-listed for the ReLit Award, and The Paris Years of Rosie Kamin (1998), which won the Harold Ribalow Prize (U.S.) for the best novel of the year and was chosen the Vermont Book of the Year; he is also the author of a collection of short fiction, Goodnight, Sweetheart and Other Stories (1993). His non-fiction and criticism includes Ordinary Paradise: Essays on Art and Culture (forthcoming in 2017), The Dog on the Bed: A Canine Alphabet (2011), a study of the human/dog bond, and Hungarian Rhapsodies: Essays on Ethnicity, Identity, and Culture (1997), which was inspired by his Hungarian-American family. His poetry collections are The Hermit in Arcadia (2011) and The Hermit’s Kiss (2006). He has also edited two literary anthologies: The Exile Book of Canadian Dog Stories (2009) and The Oxford Book of French-Canadian Short Stories (1983).

His work has also appeared in anthologies such as The Best of Canadian Essays 2017, edited by Marina Nemat and Chris Doda (Tightrope Books, 2017); The Best of Canadian Essays 2014, edited by Natalie Zina Walshots and Chris Doda (Tightrope Books, 2014); I Found It at the Movies: An Anthology of Film Poems, edited by Ruth Roach Pierson (Guernica Editions, 2014); The Best Canadian Poems in English, edited by Molly Peacock and Priscila Uppal (Tightrope Press, 2011); Crossing Lines: Poets Who Came to Canada in the Vietnam War Era, edited by Allan Briesmaster and Steven Michael Berzensky (Seraphim Editions, 2008); White Ink: Poems on Mothers and Motherhood, edited by Rishma Dunlop (Demeter Press, 2007); Seminal: An Anthology of Canada’s Gay Male Poets, edited by John Barton and Billeh Nickerson (Arsenal Pulp Press, 2007), and Short Fiction: An Anthology, edited by Rosemary Sullivan and Mark Levene (Oxford University Press, 2003). “Some of the Old Good Feelings” from Goodnight, Sweetheart and Other Stories, a monologue story about a bisexual, big-band-era musician, was filmed by the Bravo Television Network and Sleeping Giant Productions, starring John Neville, and first broadcast in 1995.

He has also enjoyed writing book reviews for Canadian Literature, The Globe and Mail, The Journal of Canadian Poetry, Maclean’s Magazine, The National Post, The Toronto Star, and The University of Toronto Quarterly.

Richard has often been accompanied at book signings and readings in literary festivals and bookstores from Boston and Toronto to Vancouver, Los Angeles and San Francisco, by one of his dogs, the pugs Zoli and Rennie and the King Charles spaniel Toby.

His literary papers are in the Thomas Fisher Rare Book Library and Special Collections of the University of Toronto. 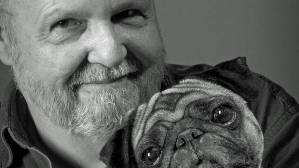