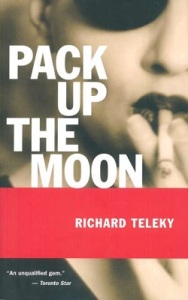 When Karl Marton returns to Toronto for his friend Jay’s funeral in 1992, he discovers that Charlotte, a close friend from his university days, was murdered in 1975. Troubled by this revelation, Karl, a university archivist living in the U.S., sets out to reconstruct Charlotte’s life and last days by revisiting the time they shared in the 60s. While there is a mystery at the novel’s heart, and the details of Charlotte’s death aren’t revealed until the final chapters, Pack Up the Moon is not a detective story; it is a contemporary memento mori, a powerful elegy about friendship, faith, and lost love.

Set in Toronto, Ontario; the university town of Oberlin, Ohio; Sarasota, Florida; and briefly in Paris, France, the story unfolds in two time periods–the early 90s and the late 60s–shifting eloquently between past and present. Karl and Charlotte first met when Karl, then a Vietnam War draft dodger and young graduate student, arrives in Toronto and is befriended by the alluring, sophisticated Charlotte, a fellow student from a wealthy Catholic family. Their complex bond develops at a time when the feminist and gay movements are just beginning, a moment of social change these characters unwittingly embody.

In facing the untimely deaths of Charlotte and his former lover Jay, Karl comes to understand the significance of faith for both of them and sees more deeply the responsibilities–and limitations–of friendship. Told in Teleky’s spare yet elegant prose, Pack Up the Moon is a moving account of how the connections between people can fail, and how the aftermath of unintended betrayal can reverberate decades later.

Praise for Pack Up the Moon

“A rare affecting novel about sorrowing over ghosts…an unqualified gem…Pack Up the Moon is a wrenching but wonderful novel, the expert dissection of a human heart.”
–The Toronto Star

“Lusciously emotional…In this engaging story of fate and adult friendship, Teleky manages that stunning and rare feat–telling an ordinary story of human interaction in a way that is universal, revelatory and suspenseful.”
–The Globe and Mail

“Richard Teleky has always been a writer’s writer…With Pack Up the Moon he delivers an eloquent exploration of the demands and limits of friendship and faith…a breakthrough book.”
–The Ottawa Citizen

“A beautifully textured, beautifully structured novel…Teleky lets his story unfold hypnotically … a book to savour and reflect upon long after you’ve turned the last page.”
–The Vancouver Sun

“Teleky’s second novel explores the ambiguous territory between love and friendship…The essence of the book is not the events, but the calibration of understand…discreet, thoughtful, compelling, and intelligent. Pack Up the Moon is an engaging novel.”
–The Montreal Gazette

“A swift and emotional juggernaut.”
–The Hamilton Spectator

“This is a novel that is paradoxically cool and passionate. It insists on differences – straight and gay, Catholic and non-believer, Canadian and American, pacifist and saber-rattling – but at the same time it discovers the human communality underlying every distinction…Teleky has the rare power to make you listen to him, thought by thought, as he pours himself into your very pulses.”
-Edmund White, author of The Married Man

“An exquisite meditation on friendship and family, Pack Up the Moon begins with a murder mystery, but the novel’s real mystery is time itself – how the past lives in the present; how we can keep people alive in our minds. The book’s power comes from its brilliant insights into human behavior and its precise rendering of the cumulative details that texture ordinary life. How ruefully wise this author is, as he asks when will the world catch up with our desires… A haunting, unforgettable novel.”
-Rosemary Sullivan, author of The Labyrinth of Desire

“The writing is poignant, honest and simple – a force that compels readers to examine their own mortality.”
–The Ottawa Sun

“I enjoyed Richard Teleky’s Pack Up the Moon as much as any gay novel I’ve read in the last couple of years. The story of a gay-straight friendship in early 1970s Toronto, it’s an altogether splendid portrait of platonic high romance at a time only subtly inflected with the emerging ideas of gay lib…a deeply felt meditation on the tensions and demands of friendship.”
-Brent Ledger, Extra

“With a deft hand and perfect pitch, Teleky aptly tackles the fierce dichotomies that exist throughout the novel: straight and gay, believer and non-believer, romantic love and friendship…Teleky infuses this tale with subtlety and elegance.”
–Tandem/Corriere Canadese

“A thoroughly engrossing novel, the work of a very skillful craftsman…Teleky, like all the best novelists, leaves one with that sense of the ultimate mystery of our existence.”
–TWN: Toronto Women’s Newspaper